After we had delivered our last Marketing Pitch at University, we thought the best way to celebrate would be to book a girly getaway! We were undecided on the location but after checking Skyscanner, it seemed most realistic that we could afford a getaway to Barcelona…

It was surprisingly cheap! Around £80 for Ryanair flights (only taking on hand luggage), and about the same for the Hostel. I know what you are thinking… Oh, she stayed at a HOSTEL!? It wasn’t actually that bad! It was like a low rating hotel. It would have been impossible to stay in a hotel; they were over £200 for a four night stay! 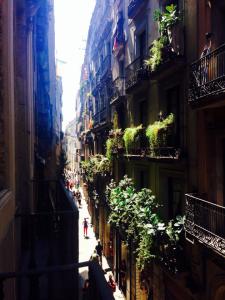 The hostel was slap bang in the middle of the Gothic Quarter, which turned out to be an amazing location. There were tons of bars, restaurants and shops nearby, and we were a 5 minute walk from the main strip; Las Ramblas.

We had briefly planned out all of the things that we wanted to do using a great app called Tripomatic. It lets you select the destinations and the dates you are going to be there, and presents you with the most popular tourist activities to add to your schedule. It even plans out how long you will need to spend at each attraction!
View app website here

The main places that we visited were the main Cathedral, Park Guell, Barceloneta Beach, Barcelona Aquarium and Arc de Triomf. Oh, and countless Zara stores. We talked ourselves into spending money in Zara because it is so much cheaper in Spain, and makes it more affordable for us poor students. 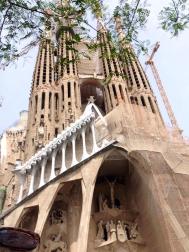 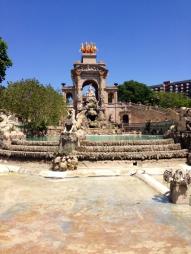 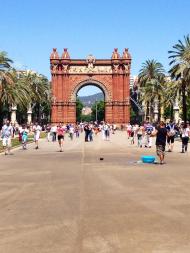 Although, we didn’t want to have tapas every night, we sure did get 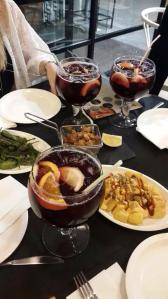 our fair share. Feeding times worked pretty well with all of us, there were no arguments or disputes of where we were going to eat, and we were all pretty easy going. The first night we discovered a square full of restaurants, located just off of Las Ramblas, and picked an Italian restaurant as we all wanted Pizza. The second night we chose another restaurant in the square and went for pasta. The third night we opted for a Spanish Seafood Paella, and the last night was devoted to burgers and tapas (and a huge bowl of sangria each).

I’ll be honest, everywhere served great food, but you have to be careful of the prices. We each took around 200 Euros for 4 nights, so a budget of 50 Euros per day; and we did go over budget. It was around 20 to 30 Euros for dinner, more if we were drinking too. You also have to consider how much it is for each tourist attraction you want to visit
(the app also tells you that!) 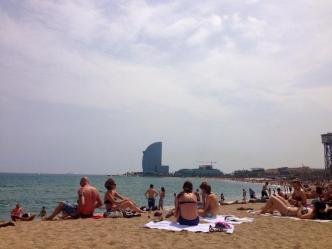 On the penultimate day, we squeezed in a beach day, and took time out to fully relax and take in the Spanish sun. Although the beach is lovely, it is far from peaceful; there is a ton of sales men walking around the beach asking you if you want a Mojito, a Sangria, and even if you want a massage! Another distraction was the amount of promoters the same age as us, coming around and trying to flog us tickets to their nights out in Barcelona.

We did, however, fall victim to two girls selling us tickets to an all inclusive bar, and entry to one of the big clubs in Barcelona. It cost us 25 Euros for 3 hours pre drinking in a bar, and our entry paid for into Shoko Beach Club at Port Olympic.
It was so worth it!

We had such a fun night and I have never experienced a club like it. I would recommend going to Port Olympic for the nightlife, and would suggest joining onto a bar crawl to get the discounted entry, as it normally costs around 20 Euros to get in anyway.

Top Tips for Travelling to Barcelona: